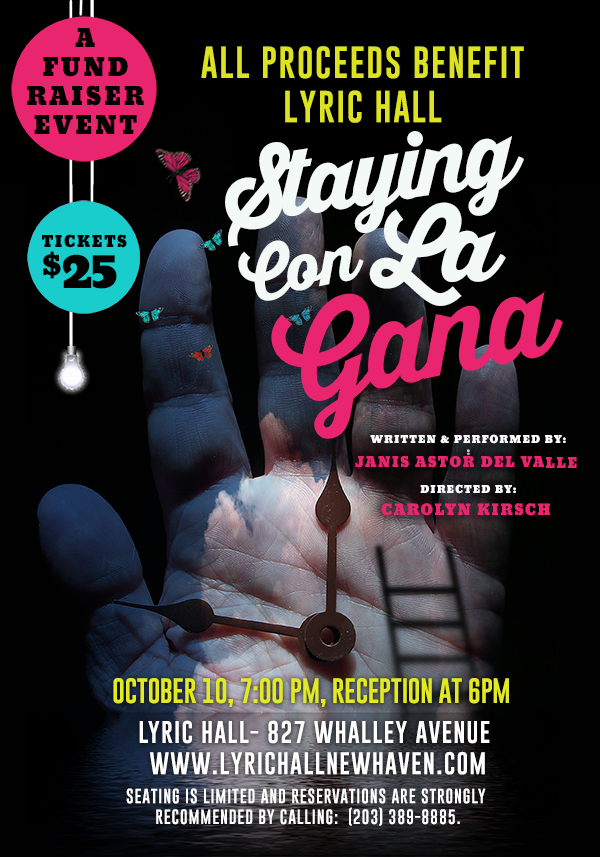 FOR IMMEDIATE RELEASE- As a fundraiser for Lyric Hall, writer-performer Janis Astor del Valle is launching a new solo piece, directed by Carolyn Kirsch, on Saturday, October 10 at 7pm. A reception precedes the show at 6pm. An audience talkback immediately follows the performance. Tickets are $25.00; all proceeds benefit Lyric Hall. Seating is limited and reservations are strongly recommended by calling: (203) 389-8885. In Staying con la Gana, Astor combines spoken word and monologues to introduce a cast of characters who are all longing for something – or someone: parents missing their children, women pining for lovers and others, activists fighting for justice. “I’m an avid fan of John’s, all he’s done for arts and culture in New Haven with this magnificent space. I wanted to find a way to support his work, and this event seemed like a great way to help contribute to his efforts. It’s also a good opportunity for me to try out new material, reveal a bit of my process.” Staying con la Gana marks the third collaboration between Astor and Kirsch. Janis Astor del Valle is a Bronx-born Puerto Rican lesbian writer/performer/filmmaker who uses her plays and films to promote discourse about and foster understanding of LGBT issues and cultural diversity. Her work is published in the journal Sinister Women 97: Out Latina Lesbians, and in six anthologies, including Puro Teatro and Bullying: Replies, Rebuttals, Confessions, and Catharsis. She serves as an Assistant Professor at SUNY Purchase, and resides in New Haven, CT, with her wife, their cat and dog. www.janisastor.com Carolyn Kirsch has performed in 15 Broadway musicals over a 21 year career in New York. She was in the original company of "A Chorus Line" for which she won a Theatre World Award. Throughout her career, she worked extensively with Michael Bennett and Bob Fosse. She was one of the first teachers of Fosse Technique in the country to be sanctioned by The Verdon Fosse Estate. Carolyn chairs the Musical Theatre Department of the Center for Creative Youth at Wesleyan and previously served on the Board of Directors of The Connecticut Dance Alliance. About Lyric Hall Designed by noted architect CJ Bailey, and constructed in 1913; the former West Rock Theater was the place where working men and women of Westville came to be entertained by silent films and vaudeville acts. By the early Twenties it was overshadowed by the grand movie palaces and would close in 1925. Over the next several decades, the theater underwent several transformations, eventually becoming Wayne Chorney’s Antiques. The theater was long forgotten. In 2005 the property came on the market as a tear down, it was purchased by John Cavaliere and placed on the National Register of Historic Places. Now the front of the building is the headquarters of Lyric Hall Antiques and Conservation. Since then with help from the City Of New Haven the facade has been rejuvenated and the interior space recreated with 85 % recycled materials.