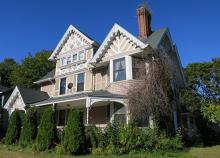 "An abandoned showpiece circa-1890 home in Westville is crumbling-and the city, its legal owner, and a series of would-be rescuers say they can't stop it. More specifically, they say they've been trying to put the property into responsible hands. But they can't work their way through a maze of invisible out-of-town bankers, mortgage lenders, and lawyers who seem in no rush to protect their investment. The saga has gone on for five years, since the early years of the national foreclosure crisis. The fate of the home at 500 Central Ave.